St. Michael’s is the youngest parish in Stearns County, established in 1969 to serve the fast-growing area on the northwest side of the city. Its church was the first built in the St. Cloud Diocese following Vatican II. The parish was named in honor of the patron saint of Michael Kremer on whose land the church was built. From its inception as a parish on July 1, 1969, until the new church was completed, members attended Sunday mass at a local theater. Many of the original parishioners recall that before each Sunday service, a group of volunteers arrived early to sweep up the popcorn from the previous night’s movie. From the 200 families at its inception, the parish has grown to over 1100 members. A building addition completed in 1996, added a parish center, offices and religious education classrooms.

In the mid 1950s, as the Catholic population experienced significant increases, religious facilities planning often envisioned a multi-use one-story building, with a worship space joined by a gathering area, and a church space. The Church of St. Michael is such an example. The identifying church element is a large white stucco gable shape projecting upward from the one-story massing of the building complex. In these post-war churches, the main entrance brought parishioners into a gathering space, much larger and more multi- functional than the centuries-old vestibule. In contrast to the vestibule, the gathering space is spacious and is served amply with sunlight by means of large windows. This space would seem to have a somewhat secular character, but a large cross in a circle shape embedded in the ceiling informs visitors and parishioners as to the purpose of the overall facility. Curved walls and granite facing material enrich the space.
The nave, entered through the gathering space, presents two seating areas extending at angles from the altar area. The asymmetrical architectural plan extending at angles from the altar area. The asymmetrical architectural plan becomes defined by three large upward sloping beams supporting roof structure that converge over the altar under a large skylight. A hexagonal-shaped beam is suspended from the converging beam feature. The architectural intention here is to form an unorthodox and contemporary religious space by means of abstract structural geometry that lead the eyes upward to the circle of light representing the beyond and the realm of the spirit.

We, the people of the Church of Saint Michael, are called to love and serve the Lord in our daily lives. In response to this call, it is the mission of our parish to provide opportunities for members … END_OF_DOCUMENT_TOKEN_TO_BE_REPLACED 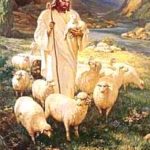 Catechesis of the Good Shepherd will be offered at St. Michael's Church on Tuesday morning from 9:00 to 10:30 am beginning September 11, 2018.   This … END_OF_DOCUMENT_TOKEN_TO_BE_REPLACED 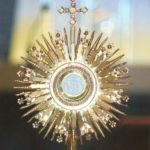 St. Joseph and St. Michael Family Holy Hour Wednesday Nights Location:  St. Michael's Church Remember Jesus is ever patient with us, if we could … END_OF_DOCUMENT_TOKEN_TO_BE_REPLACED

Do you want to be involved?